The question we often get at times like this from clients and friends is “what is going on?”  Sometimes the answer for why markets are behaving the way they are is fairly obvious but usually it is not so obvious.  In fact, it’s usually extremely difficult to answer that question because there are so many factors influencing the decisions of so many market participants that to try to summarize it all into one neat little package is a fool’s errand.

However, on some occasions, a more significant contributing factor to a market pull back is apparent.  We believe this is just such a case.  Over the past couple of weeks, the U.S. trade discussions with China have taken a larger role on the world stage.  You may have heard that the Trump administration is taking a tough approach to trade negotiations with China as many economists and politicians on both sides of the political spectrum are of the belief that China has engaged in unfair trade practices (among other alleged misdeeds) with the U.S. and other countries going back many years.  To pressure China into making a trade deal with the U.S. that is fairer to U.S. interests, the Trump administration has imposed tariffs on the importation of many Chinese goods into the U.S.  Predictably, the Chinese have countered by slapping tariffs of their own on the importation of many U.S. goods into China.

The investment markets have reacted negatively to this tug-of-war by engaging in a sell-off of sorts.  The concern is multi-fold.  First, the concern is that the profits of U.S. companies that do business in China will suffer due to the tariffs imposed upon those goods by the Chinese and the corresponding reduction in Chinese sales due to having to sell those goods at a higher price.  Second, there is concern that U.S. companies that rely on imported Chinese goods as a component of products that they make here will also suffer due to a corresponding increase in their production costs.  These concerns are all quite valid of course.

Our belief is that this trade war will be temporary.  We do not possess a crystal ball, of course, and we have no way of knowing if this trade war will end anytime soon.  However, after the tariffs kick in on June 1, the possibility of real economic harm occurring to each country becomes a reality and neither government wants that.  For the Trump administration, the strength of the economy has been a selling point for re-election and so they are likely to have little interest in a trade war that jeopardizes such a big selling point.  For China, they are attempting to position themselves as a global economic power on par with the U.S.  Given the ambitious economic goals of President Xi Xinping, China can likewise little afford a prolonged trade war with the U.S. that would threaten to undermine those goals.  Both countries need each other economically and so both are incentivized to reach an agreement.

Complicating negotiations are a couple of factors.   First, both countries are world powers and neither wants to be seen as being “bullied” by the other party.  So our belief is that any agreement that is reached will need to be one that allows both sides to “save face.”   Second, the political infighting occurring in the U.S. over the past couple of years has caused other global powers (including China) to take notice.  It is more difficult to negotiate on a world stage when political infighting causes other world powers to question U.S. unity and resolve.  In spite of these hurdles, we believe that an agreement will be reached, and we think fairly soon.  It may take weeks or months but we believe that one is coming and that a significant market bounce would likely follow.

With that in mind, we encourage clients and friends alike to stay the course of their investment plan.  In the midst of the near-term pain of a market pull back, it is easy to forget that nothing lasts forever.  We often fall into the trap of thinking the current circumstances are permanent and fail to see through to the other side of the momentary pain. 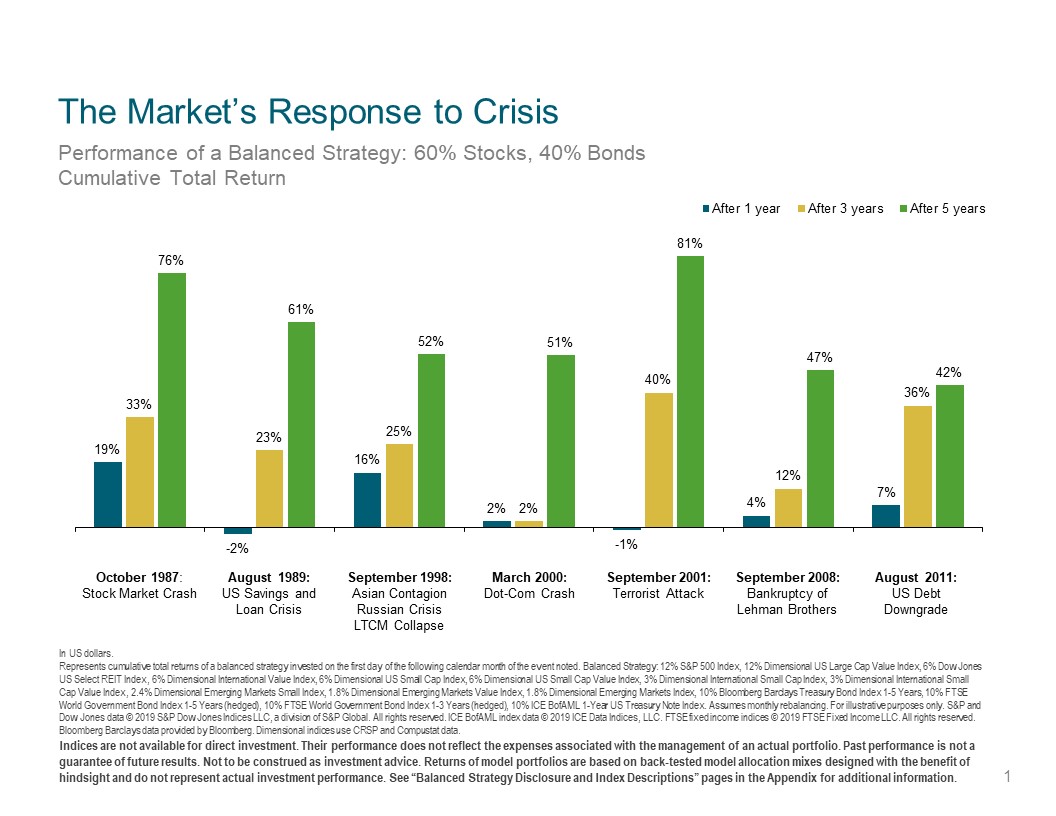 The second chart examines the market returns over 1, 3, and 5 year periods following market corrections of at least 10% going back to 1926. 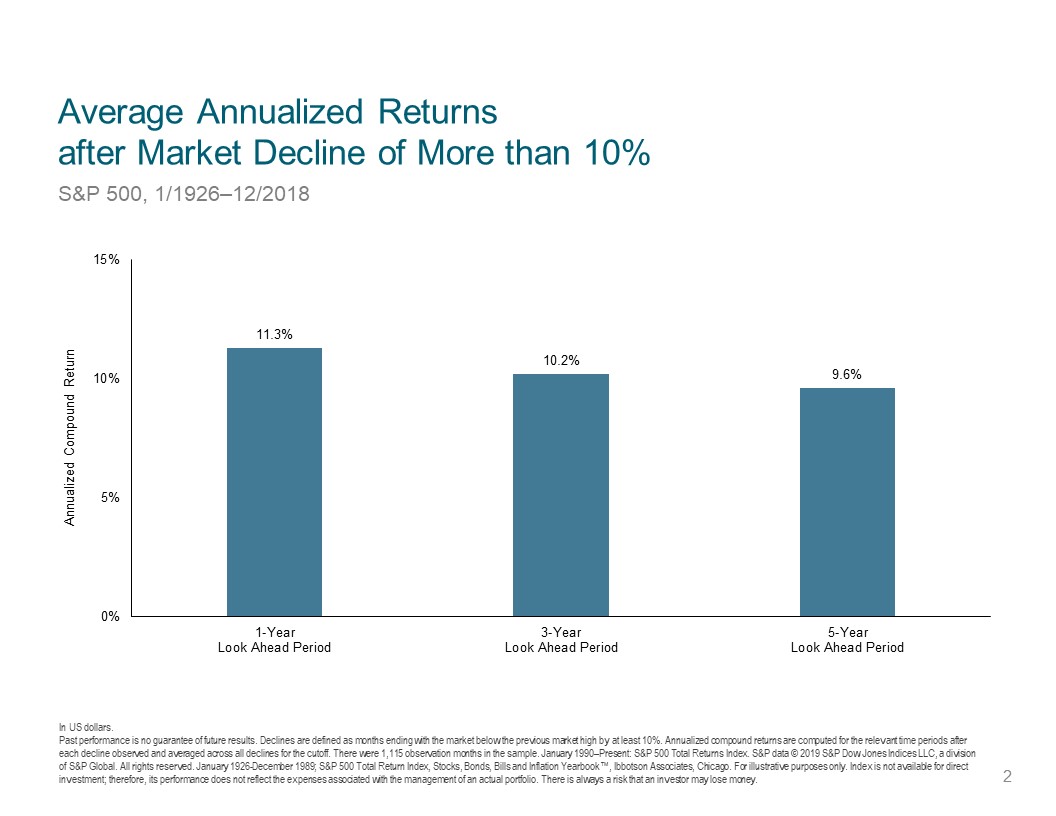 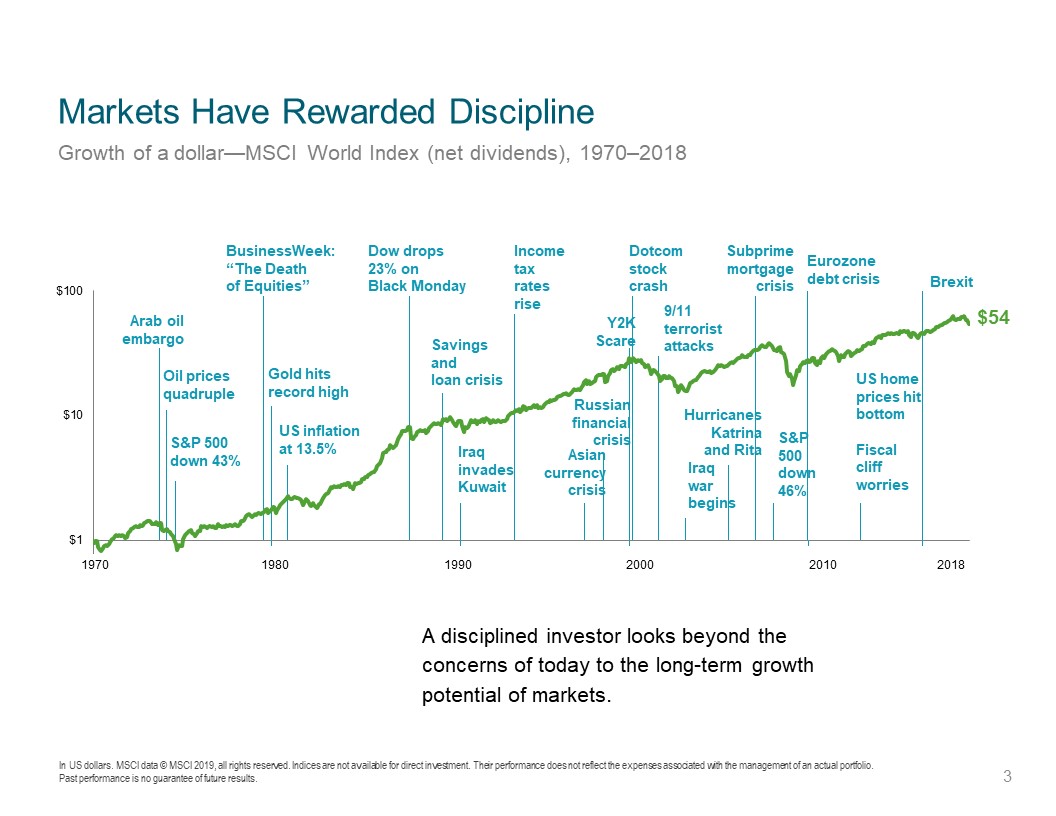 The last chart that we’ve attached is the common cycle of human emotion that market participants may frequently feel.  It’s important to understand that this cycle can lead to fear-based decision making if one is not careful.  As we illustrated in our last Market Commentary, missing out on just the best 25 days of market returns over the past 28 years would have cost more than half of the overall return otherwise available had the investor simply stayed invested. 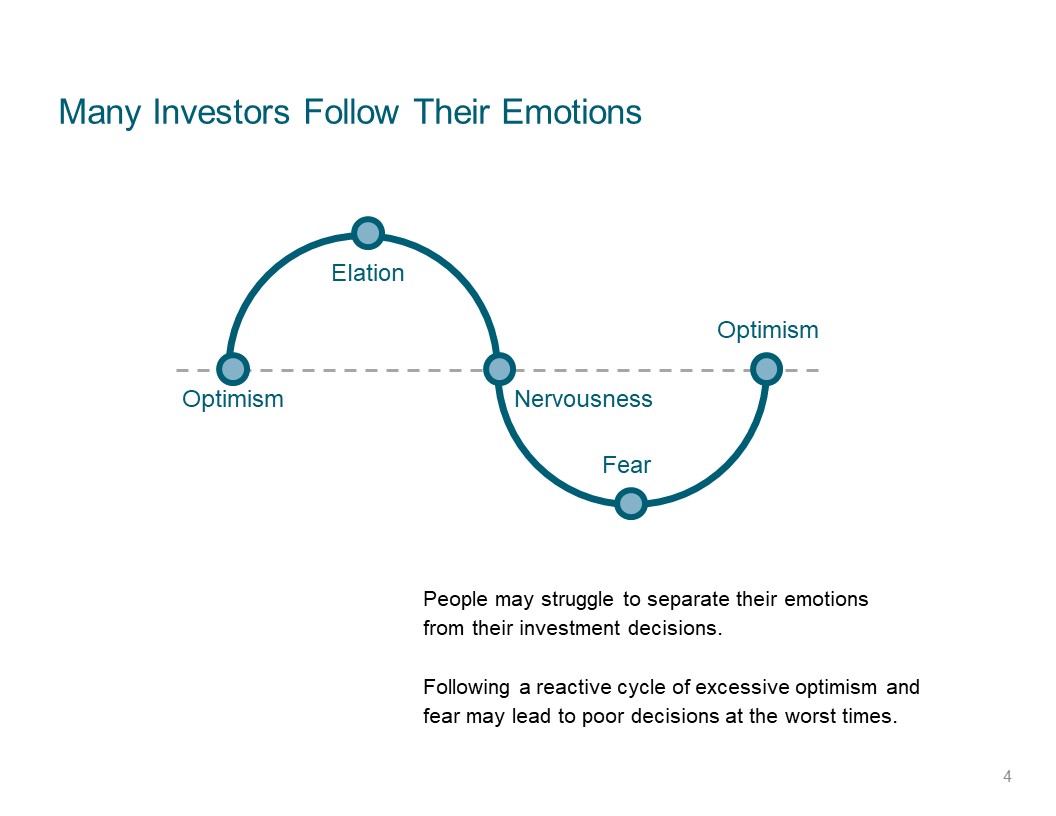 Obviously, nobody knows when those “best days” will occur.  So the lesson for the investor is to stay invested to ensure that he or she participates in those “best days.”   Reactionary, fear-based selling can and does cost real money.

The important thing for all of us to remember is that if you have an asset allocation plan, your plan is designed with the long term in mind.  It takes into account that there will be market corrections, bear markets, and market upturns over a multiple year time frame.  None of those occurrences are unforeseen or unusual.