We’ve been getting questions from clients and friends in recent weeks regarding the upcoming November elections and what the election results may portend for the financial markets. These questions and concerns come from people of all political persuasions and, in our view, tend to have an outsized focus on the outcome of the Presidential election in particular. It seems that while all are comfortable if “their guy” wins, they have concerns about what it may mean for the financial markets if “the other guy” wins the Presidency.

Past performance is never a guarantee of future results but looking at past market performance during election years is informative. Going back to 1928, the S&P 500 ended the year on a positive note in 17 of the past 23 Presidential election years with an average annual return of 7.1%1. When looking at the “down market” Presidential election years during that period, many of those “down markets” can be explained by factors that had little to do with the Presidential election, including the Great Depression in 1932, the brink of World War II in 1940, the tech bubble bursting in 2000, and the global sub-prime mortgage crisis in 2008. In fact, as we dig deeper, we see that much more so than election results, stock market returns are heavily influenced by many factors, including economic business cycles, globalization, corporate profits, etc. Can economic policies put in place by our elected officials impact these factors? Of course. However, we note that regardless of who the President is, whether Democrat or Republican, market performance is greatly impacted by those factors.

The chart below4 strongly illustrates the preceding point. As you can see, virtually every recent President, whether Democrat or Republican, has enjoyed positive returns with the exception of Presidents Herbert Hoover and George W. Bush, which were Presidents during the great depression and sub-prime mortgage financial crisis, respectively.

Interestingly, while Presidential election years have tended to enjoy strong market returns over time, years 1 and 2 following election years have been less positive with average returns of 5.8% and 4.5%, respectively. Year 3 following an election year (i.e. the year before the next election year) has seen average market returns of 13.7%2. We make no comment about these data points other than to note that their predictive value is questionable. These average returns arose because of the circumstances occurring at the time (i.e. the existing business and economic factors), just as future returns will arise because of future economic circumstances.

Many of you may be thinking “yes, but these positive results that occurred regardless of who was President only occurred because there was an opposition party that controlled one or both branches of Congress and the Congress kept the President that I don’t like in line.” Let’s get into the weeds a bit more and examine that hypothesis. Do markets perform better when the government is divided and neither party is in control? Let’s look back to 1928 under three separate government scenarios. Under scenario 1, where the Presidency and the Congress was controlled entirely by a single party, in the two years following an election, the S&P 500 index gained 16.9%, on average. Under scenario 2, where one party controlled the Presidency and the opposition party controlled the Congress, the S&P 500 gained 15.6%. Under Scenario 3, where one party controlled the Presidency and Congress was divided, the S&P 500 gained just 5.5%. However, we’re not sure what kind of a conclusion can be drawn from Scenario 3 either because in recent memory, namely the two-year periods following the 2010 and 2012 elections, the S&P 500 rose 19% and 42%, respectively, under such a scenario3. Our conclusion is that nothing conclusive can be drawn from this analysis. 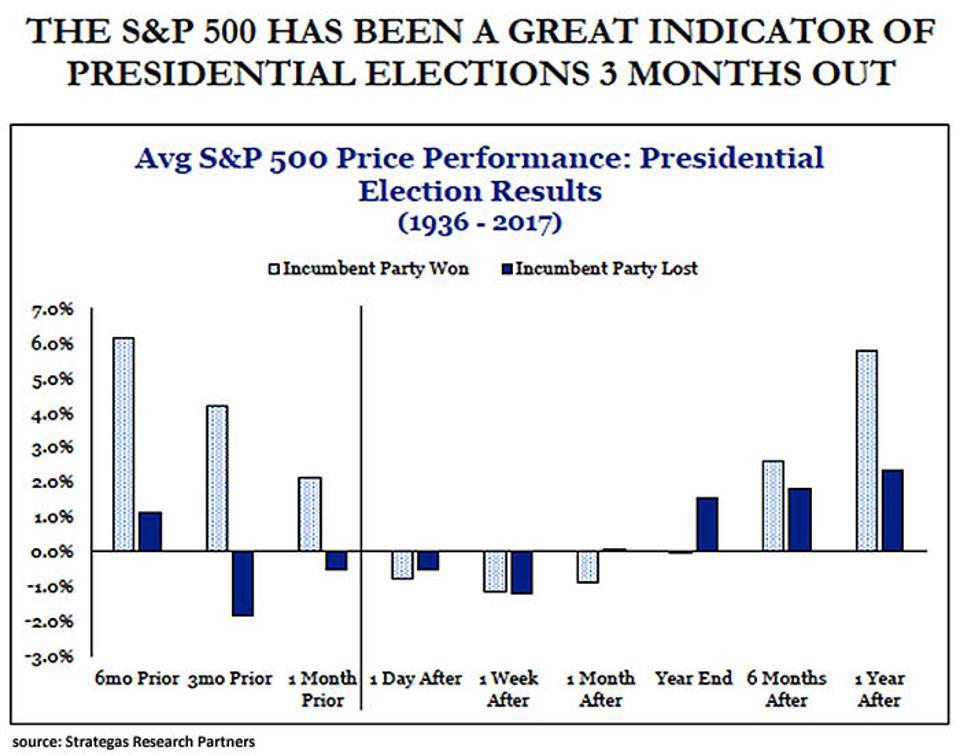 So what can we glean from all of this? Our main takeaway is that Presidents themselves do not impact market performance to anywhere near the degree that commentators may suggest. Remember, “the market” is made up of millions of participants, each with their own experience, emotions, biases, etc. and those participants react to a myriad of economic, geopolitical, and business factors (discussed above), many of which have little to do with who the President is.

We’ve heard some ask “yes, but what about the scenario where America is no longer a capitalist country, taxes and business regulations are increased to a suffocating degree, and the free enterprise economy collapses?” While we acknowledge that such an outcome, however unlikely, is theoretically possible and can point to other countries throughout history where this has occurred, we would also point out that there are many other potential geopolitical events that could present a similar threat to economic prosperity and financial market performance (e.g. wars, pandemics, acts of nature, etc). Yet, we routinely accept those risks without undue concern.

This is not to suggest that policy isn’t important or that voters should take a “devil may care” approach to voting. Far from it. Policies can and do indeed affect the ability of

individuals and businesses to make money and keep their money or face hurdles in making money and keeping their money. Naturally, this can and does affect market performance. However, we would point out that the President, the Congress, the various Governors, the various state legislatures, various governmental regulatory agencies, etc. ALL collectively are factors with respect to the business and economic environment. Moreover, if something that is enacted or promulgated is unconstitutional, we have courts that will intervene. It is extremely difficult for any one person or small group of people to affect the kind of seismic change required to fundamentally change our country’s economic system. Could it happen? Sure, anything is theoretically possible. Will it happen? We think it’s unlikely to happen, at least not to the degree that some have suggested.

It is important to note that news headlines are designed to grab your attention. For the news media, Presidential elections are their “every four-year Olympics” and are the time when they make most of their advertising revenue. They’re trying to get as many views, clicks, and listens as possible - as quickly as possible. The result is often sensationalized reporting with a tenuous relationship to accuracy. As we can see from the chart below4 there have been many events that one could choose to have been worried about over the last 50 years. Despite these worrisome events, markets have remained resilient and have eventually weathered all storms. As we write this in mid-September, with the Presidential polling data tightening and the outcome of the November elections uncertain, most major market indices are sitting at all-time highs.

Some have suggested that an “educated guess” should be made about when to become more defensive in anticipation of the elections with that thought that if and when the markets settle down after the elections, a similar “educated guess” can be made about when to become less defensive. This requires guessing correctly not once, but twice. It is very difficult to identify systematic return patterns in election years. Therefore, guessing about how the market may or may not react to a given candidate winning an election is equally difficult – and very unwise. On average, market returns have been positive both in election years and the subsequent year. However, bear in mind that

So what should an investor do? As always, focus on what you can control. An investor should always be focused on the level of risk that he or she is willing to bear, regardless of where that risk may or may not come from. The truth is that many factors can present risk and investors should simply see potentially risky events as a certain occurrence from time to time, even if they can’t always define what that risk looks like (who could have predicted COVID-19 a year ago and the impact that it would have on the markets?). As markets go up and down (regardless of who is President) it’s important to maintain a globally diversified portfolio with a risk tolerance level that you’re comfortable with. This leads to proper asset allocation that helps an investor achieve his/her financial goals.

There will always be bumps in the road in the financial markets and areas of potential risk. While it’s very easy to get caught up in breathless media headlines, it’s important to not get too hung up on “what if scenarios” over this Presidential election cycle and lose sight of your big picture financial goals. Proper asset allocation is what has the greatest impact on long-term investment returns, no matter who wins elections.